The IT service provider adesso will open a new branch office in Potsdam-Babelsberg on 1 July. The branch will be adesso SE’s second office in the Berlin area. The new location will benefit from the proximity to the scientific community in Potsdam’s Babelsberg district, which acts as a hub for creative and innovative industries such as media and film. To this end, adesso has formed close ties with the neighbouring XU Exponential University, Germany’s first institute of higher education for digitalisation. The school is set to launch the joint study programme adesso School of Coding and Software Engineering in the upcoming winter semester.

In this form, the educational initiative in Potsdam-Babelsberg is something completely new for the adesso Group. From October, students will be able to earn a bachelor’s degree in coding and software engineering at XU Exponential University of Applied Sciences as part of the programme.

The new adesso office in Potsdam is located directly at the Filmstudio Babelsberg.

A close proximity to universities and technical colleges has traditionally played an important role in deciding where adesso’s offices are located. The IT service provider employs learners at local higher education institutions as student workers. The advantage of this approach is that students can gain practical experience before they graduate. In Potsdam, the company plans to use a “3+2 model”: students will spend three days a week studying at XU Exponential University while working on hands-on, real-life projects at adesso Potsdam on the remaining two days. Even students in their first semester will be able to participate.

“The students benefit greatly from our partnerships with colleges and universities,” says Christoph Hecht, Site Manager of the new adesso Potsdam location and Lecturer of Software Engineering at XU Exponential University. The school’s campus is located within walking distance of adesso’s office. “The job at adesso allows them to earn a little money on the side and gives them the opportunity to gain practical experience in real-life customer projects in business and administration – exciting career prospects after graduation included.” 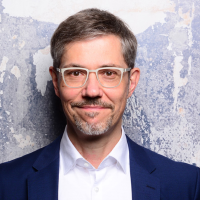 Christoph Hecht is the location manager of the new adesso office in Potsdam-Babelsberg.

Attracting IT experts from the Berlin area

The company hopes the new location in Potsdam will have a positive effect when it comes to recruiting IT specialists in Berlin and the surrounding state of Brandenburg. Located right next to Studio Babelsberg, the new office of Germany’s Best Employer 2020 (Great Place to Work) is an alternative for IT experts who find the commute to adesso’s location in Berlin’s Friedrichshain district too long. In addition, some 30 employees who work in Berlin will relocate to Potsdam once the office opens to shorten their daily commute and relieve the strain on the expanding Berlin branch, which will move to a spacious new location in Berlin’s Kreuzberg neighbourhood next year.

Contact details for the new adesso office in Potsdam-Babelsberg:

With our press service, we provide you with various materials that complement our corporate news or serve as background information.

To the press service