Last year, we started migrating our single-repo, multi-module code-base (160+ backend interfaces) from the old OSGI Framework to a new multi-repo cloud-native architecture with the following characteristics:

A separate code repository allows for faster and more frequent releases but also introduces a big challenge of creating or updating configuration for the operation team due to the number of releases and variety of interfaces.

In this article, we would like to focus on the documentation aspect of having a cloud-native architecture and share our way of documentation with the hope that it may help other teams and also benefit from the reader’s recommendations.

Before we talk about the challenges and our solution, it would be a good idea to see what we have been doing so far. We used to have various documents based on Microsoft Word and some diagrams based on the application Enterprise Architect.

We had the following documents:

In addition, each of our developers had their private how-to guides.

Since we were working in an agile team, the documentation artifacts were tagged with the application version and saved as a PDF and delivered to the customer via email or some file-sharing platform.

As you can guess, it did bring lots of issues such as:

With the new migration project, we started to migrate our complete source code to new cloud-native architecture and one of the important goals of our migration was zero-to-hero documentation, which should have the following qualities:

We expect the above quality measures can:

Changing the architecture can impose big changes on the way of working. For example concerning documentation:

In the following section, we’ll talk about our solution and how we achieved the above-mentioned goals.

The very first step we took to achieve our documentation goal was, to migrate from binary formats to text-based formats which solves the problem of reviewing and diff-checks.

We used AsciiDoc for our technical writing. The reasons for our decision were:

Now that we have our documentation as code, we need to:

In our new project we produce the following artifacts:

In addition to the above documents, there are other documents such as the functional requirements of the interface.

The Macro-Architecture and Overall-Operation-Manual are saved separately in their git repositories. The rest of the documents are interface-specific and are saved along with the source code and are versioned the same as the application version.

To solve the problem with versioning documents we commit to plain-text languages such as Asciidoc and Markdown.

Now that we have our document as a source, we can apply whatever transformation and formatting we want.

The challenge: The source code is scattered in many git repositories and we need to combine them with the least effort using some kind of engine which we call doc-centralizer (see below). 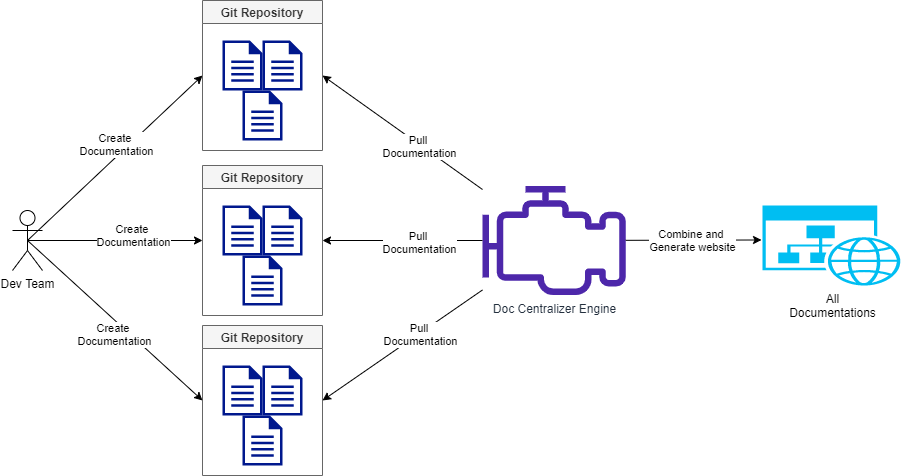 We do not need to reinvent the wheel. It already exists and is perfectly documented!

Antora is a multi-repository documentation site generator for tech writers who are writing text or documentation in AsciiDoc. The configuration of Antora for generating the final output is done in a declarative manifest called antora-playbook.yml. In this playbook, we enter the source code repository URL and branches that should be included in the documentation.

Our documentation is built based on various components such as interface-architecture, interface operation manual etc. Each of these components could have various versions. For example, each release branch can have its own version.

To understand better, we can look into the documentation of Camel framework.

In the above example, we can click and switch to the following components:

Also, we can choose a specific version of a component. For example, we can click on version 2.x under Camel components to see the documentation. This is especially useful for readers to fast-switch and compare various versions.

Note: discussing Antora is not the focus of this article and the usage of this framework can be best learned on its website.

We use Anotra in a pipeline to fetch all the documentation and combine them into a static website. Once we have our website, we can serve it using any webserver anywhere!

We chose to deliver our documentation as a container image to a container registry which can be run easily on any container platform such as Kubernetes or Openshift.

The build and delivery process is automated and uses something like the below dockerfile to build a container image:

The provided dockerfile is just one simple example of how to build the container. Depending on the requirements, we can also use other webservers such as Nginx or enable authentication and authorization which are not the focus of this article.

Reza Nirumand is a Senior Software Engineer at adesso located in Dortmund. He is involved in various projects in the Banking industry and he is responsible for the designing and delivering of cloud-native applications.